Accountability
With some of the spectacular private sector failures over the past decade, there has been much ado about accountable organizations. Organizations in all sectors have been have been struggling publicly with how to become more accountable. Particularly, when things go wrong, everyone wants to know who was accountable.

Typically one can turn to research literature for guidance, but when it comes to the accountability of individuals, the literature is not very helpful. Only a handful of researchers publish on individual accountability in organizations. When they do so, they create their own definitions. Sometimes multiple definitions in the same paper!

But what does accountability really mean? We at Effective Managers™ created the following definition:

Accountability is an obligation for which
one can be held to account for one’s results and actions
by a specified other.

Three aspects of this definition are important:

The everyday meaning of accountability is captured in the phrase “what by when”. The manager delegates work by very clearly explaining what needs to be done, by when, in what quantity and quality; and also what resources exist (such as a budget) to get the result. 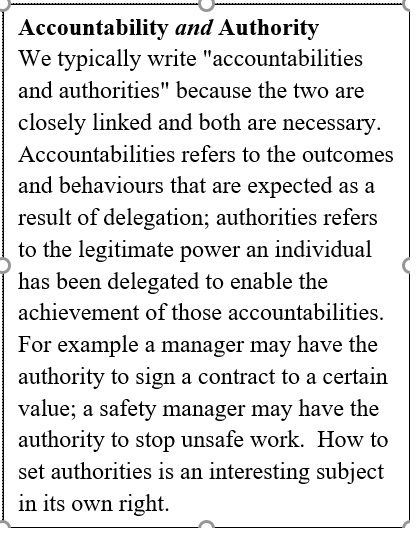 At least, that is how delegation should be done. Clarity is critically important in delegating work. Our research shows it is very highly correlated with manager effectiveness. If a senior manager is not clear about exactly what the subordinate manager is accountable for, then other aspects of work life can get in the way. The subordinate manager may feel accountable to other functional managers, customers, peers or colleagues; they may feel accountable to other project goals, employees, or even self-held beliefs.

We call these competing pulls “felt accountability”. If subordinate managers feel accountable to customers, or to the team, or to peers in other parts of the organizations, they will be distracted and pulled away from the real accountability that has been delegated their manager. The subordinate manager will be doing what they feel is most important, not what actually is a priority.

Clarity in “what by when” is bolstered if the manager acknowledges competing factors that affect felt accountability.  It is not enough to be clear about the deliverables, the manager needs to be clear in setting context for the work.

Together, these two concepts go a long way to guiding the delegation of accountability and authority in organizations. But alone, they are not sufficient.

How low in the organization can you delegate a deliverable? It should be as low as possible but only to the point where the individual accountable for delivering the results has the personal capability to do the work. There comes a point where the work cannot be delegated lower or the capability of the individual will not be sufficient for the complexity of the objective. Measuring a person’s capability to handle complexity is an important topic we will discuss in future papers.

The position where there is a perfect match between the capability of the individual and complexity of the task, together with the accountability, authority, and resourcing to accomplish the task is the Effective Point of Accountability™.

How does one know where in the organization that single point of accountability should sit? Let’s look at some examples to answer this question, looking at both “direct output” work and “cross functional work”.

Delegation of direct output Work
In our first example, we will look at straightforward “direct output” work where the individual, supported by their subordinates, has the resources to directly get the work done. Let’s think about the Vice President of Sales in a national manufacturing company.

From the perspective of the CEO, who is accountable for sales? Obviously, the Vice President of Sales. This Vice President would have an important role in developing the company’s strategy, and would be accountable for delivering sales against plans that had been approved by the Board.
But here is where it gets interesting. From the perspective of the Board of Directors, who is accountable for sales? The Board would say it is the CEO. The lesson in this is that a manager cannot elude accountability by delegating downwards.  However the Board would do better to focus on the CEO’s broader accountability for delivering a bottom line.

With sales, the Effective Point of Accountability™ cascades down the organization as follows:

This cascade of accountability is illustrated in Figure 1. 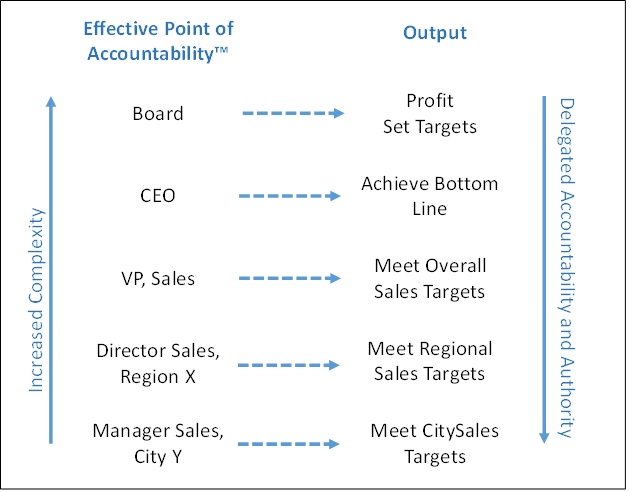 By whom are these individuals, with single points of accountability, held to account? The Sales Manager in Cities are held to account by their Director of Sales, and the Directors by the Vice President. A Director relies on their Sales Managers performing against delegated targets so that in total, together with the direct work of the Director, his or her targets are met. Similarly the Vice President relies of the collective work of the Directors so that overall sales targets are met to the satisfaction of the CEO.

When stated in these terms the answer seems self-evident, but it is amazing how many companies flounder with respect to accountability and setting the EPA. Of course this relates back to clarity of accountability, and appropriate and clear delegation down the managerial chain.

Is the Vice President of Sales’ accountability nothing more than the sum of accountabilities below him or her? No, there is “real work” to be done at each level. The Vice President integrates the work of his or her direct reports, taking into account the views of peers in other parts of the organization. That value-added work that the manager does personally and cannot be delegated needs to be identified. A big part of the non-delegated works comes in the form of setting context and boundaries for the work so that the subordinate accountable for making decisions and using judgment can do so in a consistent way.

Delegation of Cross Functional Work
In the example of the Vice President of Sales, which involved delegating direct output work, the correct Effective Point of Accountability™ was easy to identify. However, most work requires cross functional relationships for success. A finance report requires input from operations. A hiring manager requires human resources systems support. A new business system requires collaboration from operations and all of the support departments.

In most organizations today, where a project is set up, or where work depends on cross functional relationships, the work is delegated as if it were direct output work. In other words, the work keeps getting delegated down from individual to individual, to a point where someone is expected to get on with the work. This often becomes a problem for the person ultimately delegated the work. If this is a project manager accountable for delivering results which depend on the input of others who are not his or her subordinates, then the project manager is accountable for an output, but without having the authority to get the work done.

So in most cases of project work, the Effective Point of Accountability™ is higher than the project manager. For this work to be successful everyone who has a role in this success must be clear about what that role is, and what to do if there is disagreement. The person who can set those roles and resolve disagreement is the correct EPA.
To explore this, let’s look at the CFO as an example.

If I am the CEO, I see my CFO as the single point of accountability for finance. Do we have the right systems in place? Are they appropriately monitored? Are the planning and budgeting systems appropriately linked and coordinated? As the CEO, I expect the CFO to have a handle on them and even though he or she would not be doing most of the work, to be accountable for the outputs.

But for what, exactly, can the CEO hold the CFO to account?

The CEO can hold the CFO accountable for establishing certain business processes; in this example, the budget process. But can the CEO hold the CFO to account for the successful development of the budget?
No.

The CFO is not the manager of individuals upon whom the success of the overall process rests.

The CFO cannot hold the Vice President of Sales accountable for submitting a budget (i.e. doing work) by a certain date, he or she only the authority to request it. If the CEO has, for example, given the Vice President of Sales a different priority, then the VP, Sales is correct not to let their “felt accountability” to a peer derail a critical priority assigned directly by the CEO.

Consider Figure 2 which shows how the budget process aligns with the organization chart.

Okay, that was a lot of detail. The amount of detail illustrates why achieving clarity of accountability for cross functional work is not easy. In practice managers often only have a vague, often overlapping, sense of who is accountable and what relevant authorities each manager has for a project.

In this example, the EPAs for the budget process always rests with the CEO, because the CEO is the only position that has the authority to instruct all those involved in the process to comply with the process. If there is a disagreement; e.g., the VP, Operations tells the VP, Finance that it is not possible to comply with the timeline, and best effort negotiations cannot resolve the issue, only the CEO has the authority to decide and instruct.

Let’s look at a last example. Let’s say that the organization is about to implement a new business system that will require input from Operations, from Finance, from IT, possibly from Human Resources, and so on. The project manager is a Director in Finance. In order to deliver the project, time and resources will be required from all of the departments listed in this example. Where is the Effective Point of Accountability™?

For direct output, work should be delegated down the organization, by segmenting it into less complex objectives until it reaches the lowest point in the organization where the individual accountable for delivering the results has the capability to do the work at that level of complexity, is clear about expectations, and has the appropriate accountability and authority, and has been delegated the necessary resources for success. 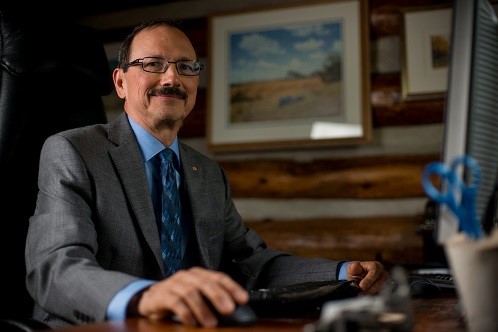 Dwight Mihalicz improves organizational performance. He focuses on manger effectiveness… ensuring that all managers, from the CEO to the front line, are focused on their key strategic priorities and have the accountability and authority required for success.

Dwight has founded and is President of Effective Managers™, a management consulting firm based in Canada and providing services globally. The firm uses the Effective Managers™ survey to assess manager effectiveness, and The Effective Point of Accountability® which helps organizations ensure the clear delegation of accountability. The implementation of this framework also breaks down silos so that work can flow smoothly across the organization.
Dwight has worked with a variety of organizations and situations. He has helped clients solve a broad variety of complex problems in local, national, and global settings.