All management and leadership are based on the reality in which it is exercised, such as our culture and values, ways of functioning and acceptable behaviors that bring us together through the common perception that we all share. In my 25 years - working with companies and organizations in other countries - the differences between countries' way of leading in practice became increasingly clear. My interest was aroused for a dimension we have no reason to consider when working in our own country.
How, then, can the differences manifest themselves? A rough description of the differences in the collaborative working life culture (which is characteristic for Scandinavia) and the hierarchical culture (found in most countries, not least the United States) are as follows:

In each country, there is research into leadership issues. With differences like these, how are the results obtained interpreted? Can they be brought straight from countries with one style to countries with the other? The tools and methods that are developed to function in a hierarchical context, do they fit into a culture of collaboration?

An example
Karolinska Sjukhuset, a well-known hospital in Stockholm, where the differences have had devastating effects because it is assumed that American management theories, developed in their individualistic and hierarchical work culture, can be applied in the Swedish collaboration culture which is very different. In general, American employees do as they are told as you could lose your job right away if you do not follow your manager´s instructions. A Swede requires the big picture, goals and requirements for quality clarified, and then wanting to gain freedom in implementation according to their skills. The result is followed up. The legislation also protects employment. You are not fired for having differences of opinion. The former culture is governed hard and in detail, the latter is based on trust.

If American thinking is now brought in - without adaptation to the working culture in which the method is to be used - a culture clash arises.

Among everything that has been reported as reasons for the multibillion-dollar loss that has arisen because of the American driven change within the hospital, the clashes in thinking and perception of reality are not considered. The foreign managers and the Swedish staff do not have the same idea of how to work. The staff members have reacted to the fact that they are not allowed to give their views and influence the design, which they are used to. Swedish managers listen to these comments and act upon them to raise the staff´s commitment. The managers, who come from a hierarchical environment, want to implement the model they bring along. The method of analysis that the US consultancy firm has been asked to bring in, is built upon the fact that they can use young well-trained consultants but not very experienced, during the consultancy work. The method is divided into different smaller steps to be followed, so that one can be in control of reaching the intended effect, in this case for the patients. The idea of controlling the value of every effort in the work chain, is acceptable for most people. There is nothing wrong with this idea. What everyone opposes, is the way you deal with the idea, as well as how you organize with many more levels of management and less freedom for the staff. Therefore, the resistance.

Who is held responsible for the billion-dollar loss? Is it the consultants' fault? One would think so when reading the book “Konsulterna - Kampen om Karolinska” 1 . So far, however, the competence of those in charge has not been discussed, the buyers, in this case the county politicians. Does one normally take the reasoning above into consideration? Most likely not. One has acted in good will but lack the cultural competence necessary when crossing cultural borders. In short, multicultural situations require that this dimension should be taken into consideration.

The example could be taken from many companies and organizations, where governance models, organizational thinking, working methods, leadership styles have been included, that do not fit with the Scandinavian culture. And the same type of reactions will follow.

Questions raised
Should we shut the doors to science and methods from other countries? Of course not, but one must make the cultural adjustment to the culture - in this case Swedish conditions. This is a question of cultural interpretation. Should we adhere to the methods straight off or are the costs and trouble caused by this approach too high to be acceptable?
Would it be easier if we all developed the same type of working culture? Is it even possible?

Are there beneficial differences between cultures that would be of value for the development of businesses in general?

What does one achieve with the Scandinavian work culture compared to other more hierarchical cultures?

Online comparisons of different sources, which present comparative studies between different countries2 , give the following picture: 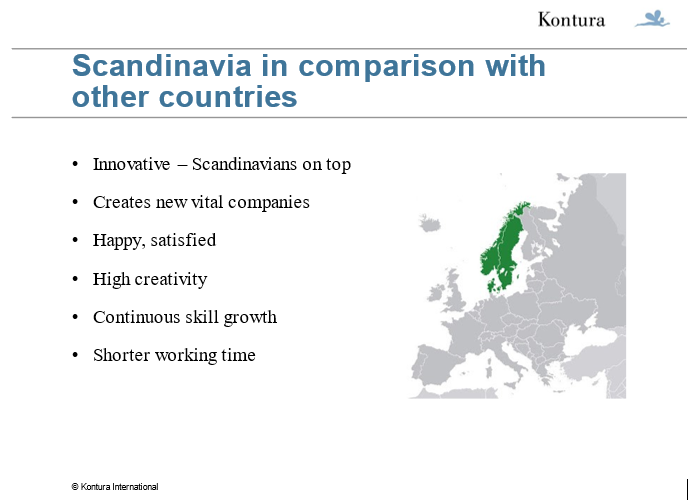 In Scandinavia, young people primarily choose to develop in the area they are interested in and have a talent for. Scandinavians in general do not choose an occupation due to payment only. Most of our staff are engaged in what they do, motivated by an inner drive, not just by money, although salary always is an important factor among others.

To be able to identify a different culture you need the comparison. One focuses on the other and knows immediately how one would act differently given the culture of one´s own.