After coming back from Astana

In Astana, where the 5th CMC International Conference was held, I realized that Kazakhstan, one of the resource powers, still continues to be developed strongly. By visiting not only the Expo site but also the HR development center of a leading construction company and the construction site of a huge large building, I made that feeling stronger, and all these made the conference more fruitful.

As usual, before and after a business trip abroad, our consulting work becomes definitely busy. I returned home from Kazakhstan on September 9 and on October 19, after 1 month later from my return, I was able to report to Tottori prefecture, my client, that I won the Gold Medal of honorable The CONSTANTINUS International Award.

On this day, when I reported the gold medal winning and main contents of the conference to Tottori prefectural Governor, Mr. Hirai, and then I handed out the Gold Medal monument to him. Because any one of Tottori prefectural officers couldn’t attend the CONSTANTINUS Award ceremony. On this time I received unexpectedly a letter of appreciation regarding PR for the improvement of work in Tottori prefecture from Governor Hirai. What was unexpected was very similar to the winning of Gold Medal. 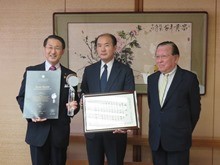 I applied for the CONSTANTINUS International Award because I thought that it is effective for CMCs all over the world to appeal widely about Japanese KAIZEN activities. In the world of food, "Japanese food" is famous all over the world, but it is as same as Japanese chefs who are worried that fake food, not genuine Japanese, is spread globally.

Likewise, as a management consultant engaged in Japanese KAIZEN activities, I decided to apply the CONSTANTINUS award for the contribution so that the misunderstood "Kaizen" would not be disseminated in the world widely, and this is the true that I did.

At a huge construction company of Kazakhstan above, it is said that they are working on kaizen throughout the company. This activity itself was a good activity. HR education center was properly operated and human development was being promoted. The management establishes respectful policies and shows respect that employees are enthusiastically engaged in activities.

However, the case of Kaizen in Tottori prefecture awarded by CONSTANTINUS Gold Medal is different from what is done overseas. For example, it is not a transient activity, it continues for many years, steadily calls for productivity and efficiency improvement from yesterday to today, from today to tomorrow. It is exactly Japanese activity that everyone, from the prefectural governor to the front line's staff, squeeze wisdom and reconsider their own work not only for themselves but also on the interests of the prefectural people who are “end users”or“customers”.

I would like to introduce this case to CMCs around the world, but it was unexpected for me that I applied for the CONSTANTINUS award, and got the gold medal fortunately.

Actually, not only the CONSTANTINUS Gold medal, but also hand-foot-and- mouth disease I got in Astana. Although I entered Astana via Moscow from Japan, I wonder if that I was sickened in that route or the Expo site. I did not have a high fever, but  blisters arose on the sole of my left foot, and so I attended the CONSTANTINUS award dinner , but I was absent from the ICMCI 30th anniversary dinner of the next day. The winning photographs on the homepage were shown with my really pale face, as you can see. I would like to forgive that the session at the Kaizen roundtable of September 7 on the next day of winning was not sufficient because of this sickness.

Many people usually think that Kaizen is “top down”, but the actual improvement activities in Japan are voluntary and autonomous activities of all employees in the workplace. In addition to improving our own work procedures, we must review our own work process for the customer who is in the next process. This will be beneficial for both the customer/client and employees.

Let’s think this case in Tottori, if students going to high school would like to get a scholarship, the administrative procedures are complicated and could only be offered from June in order to enter in April. The prefectural officer in charge, due to inconveniences for families with insufficient funds, reviewed work and made it possible to be paid in May from the simplification of the decision and permission flow. Not only was the work comfortable with improving the work efficiency of the administrative staff, but also good news for the scholarship acquirer, both became win/win. I wanted to share these quintessence of KAIZEN with the management consultant of the whole GLOBE.

At the end, I appreciate greatly to everyone concerned.