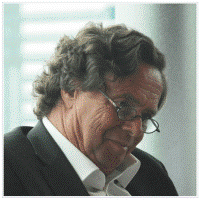 The Ooa received the sad message that Léon de Caluwé passed away on the 9th of June 2019. Léon was a very successful example of a practicing management consultant, who also worked at least as intensively on science.

He also had an positive and active involvement within the Ooa. He was a member of the Scientific Council for many years and was one of the first Academic Fellows.  For over 30 years he has been a member of the Ooa and since 2015 an honorary member.

With Léon, a skilled advisor and an inspiring person is lost, but his spirit and ideas continue to exist.