Jianhe TCM hospital is the first in China to implement this theory. The consultants analyzed the patients’ medical record information to determine who had received TCM treatment. Based on the analysis, they provide an integrated solution proposal according to the new theory. The solution was accepted and implemented by the client. Medical service capability was greatly improved within few months.

1. Background of the theory
1.1 Worldwide
On May 25, 2019, the world health organization adopted the eleventh revision of the International Statistical Classification of Diseases and Related Health Problems ICD-11. The traditional medical disease-diagnosis which originated in ancient China and now widely used in China, Japan, Korea and other countries was included in the ICD-11. The publication of the ICD-11 shows the high attention and determination of the World Health Organization to promote the development of traditional medicine.

1.2 In China
For thousands of years’, TCM has been widely recognized for its obvious therapeutic effect, its safety and simple treatment method, and affordable medical costs. However, western medicine holds the dominance in medical markets, while the TCM program only occupies a low share of treatments, even in the TCM hospitals. The health regulators have set a minimum limit on the usage amount of TCM service for TCM hospitals. But even so, it is hard for the TCM hospitals to reach the minimum limit for the lack of professional technicians and the long-term training period. To meet the requirement of residents and health regulators, Jianhe TCM hospital had an urgent need to improve its traditional medical service capability.

1.3 Background of the practice of the theory
The theory to rapidly improve traditional medical service capability was first developed by Mr. Jian Di. Considering its creative and newly-developed nature, it can only be spread and accepted by the clients we have served. Jianhe TCM hospital, as a long-term client, holds a high degree trust for JYWJ. As a result, the president of Jianhe TCM hospital began discussions about this project as soon as the theory was published.

3. Theory basis of the project
There are two basic TCM diagnosis and treatment modes. In the first mode, the patient is both diagnosed and treated by a qualified doctor. An example of this is acupuncture. In the second mode the patient is diagnosed by a doctor and treated by a nurse. An example of this is scraping therapy. Mr. Jian found that the second mode is 4 to 8 times more efficient than the first one. Thus, if the hospital were to focus on developing programs diagnosed by a doctor and performed by nurse, the TCM programs would serve more patients.

4. Project diagnosis of the hospital
At the beginning of the project, Mr. Jian assessed the operational status of the hospital. He found it had unclear hospital development goals, a small number of the professional technicians and service programs (especially nurse performed programs), low work efficiency, and inadequate marketing, management organization and performance assessment systems.

5. Project measures
Mr. Jian then clearly defined the basic strategy to improve traditional medical service competitiveness by providing more programs diagnosed by a doctor and performed by a nurse.

A TCM-by-nurse management department was established to manage all the nurses that would deliver medical services. (This was a first in China.) A human resources plan was then developed to hire, train and assess doctors and nurses according to their medical service capability.

A medical service program was the formulated than included a plan for a detailed supporting devices procurement plan.

A marketing plan was formulated specifically for the TCM programs.

Finally monitoring and management measures and a performance assessment system were put in place. 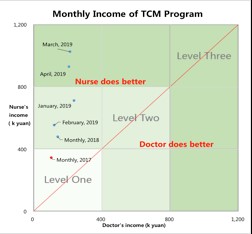 6.3 Social influence
After the project, the rapid development of the hospital created high attention in the medical industry. Fifteen additional hospitals accepted similar consulting projects. The theory has helped the development of traditional medicine and ensure that TCM services are more accessible to residents.