20th of October, Toronto, Canada – The “Constantinus International Award” was handed out to the world's best management consulting projects in the framework of the congress of the International Council of Management Consulting Institutes (ICMCI). For the sixth time consultants from all over the world were invited to present projects yielding outstanding customer benefits. The Constantinus International Award was modelled after the Austrian Constantinus Award of the Austrian Association of Management Consultancy and Information Technology (UBIT) and has already become an established hallmark of quality for knowledge-based services all over the world.

The international award showcasing excellence in consulting
“The primary objective of establishing these awards is the promotion of the consulting sector in general as well as of individual outstanding consulting projects not only nationally, but on a global scale”, explains Alfred Harl, the chairman of the Austrian Association of Management Consultancy and Information Technology (UBIT) and Chair, Constantinus International.

He continued: “The Constantinus International Award offers a platform for all nominees for international cooperation in the field. This awards represents an important tool for strengthening the client-consultant-relationship through the celebration of successful joint endeavours in addition to raising the international recognition of their projects!”

Alfred Harl on the host nation: "We are very delighted that we were able to transfer the Constantinus International Award overseas! This is not only a boost for our ceremony but also for the projects of all our nominees and a great opportunity to visit the most populous city in Canada, Toronto.”

Gold medal for Hungary, silver for Finland and Great Britain
Various projects from seven different countries were submitted this year. An international expert jury chose the nominees and, in turn, the National Champions as well as the winners from these entries. This year was an extremely tight race but Hungary was able to defend the title.

This year's gold medal went to the Hungarian Champion Helix Consulting and EQVALTEQ Hungary in consortium for its project NAK 2.0, an operations development programme for NAK, the Hungarian Chamber of Agriculture.

The first of two silver medals went to the Finish Champion Mantec International Ab for a project for VIRTA to improve productivity, increase flow (production) and shorten the lead times in production. The second silver medal went to the national Champion Beech Centre for People, Performance & Organisational Development from Great Britain with the project Towards the Cultural “Tipping Point“ – a strategic organisational development partnership – The Beech Centre and The Royal Hospital for Neuro-disability for the client “The Royal Hospital for Neuro-disability”. 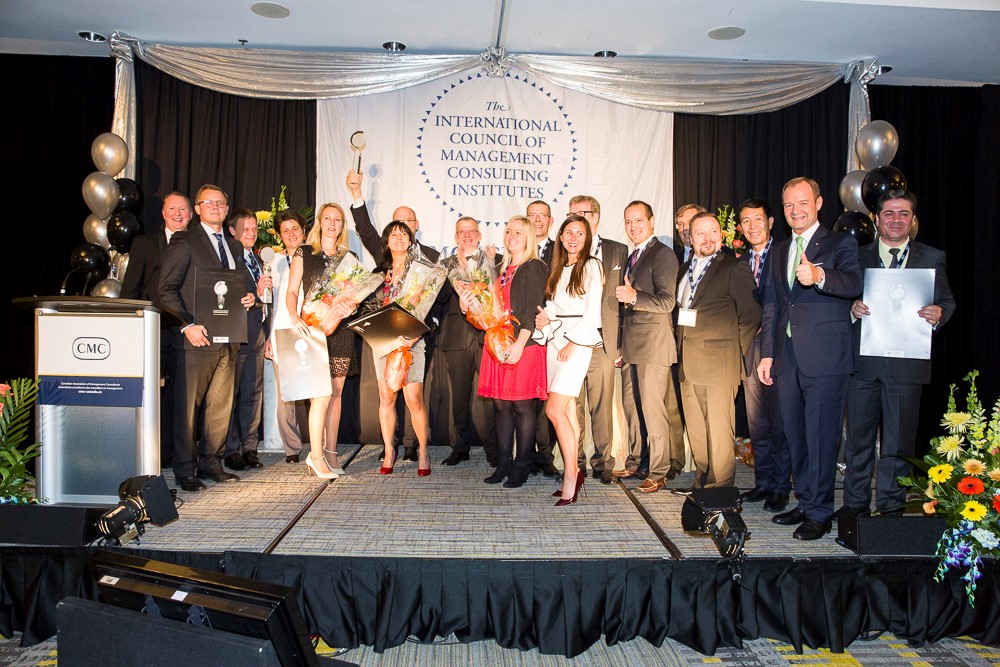 Picture (UBIT / ICMCI) with all the Champions